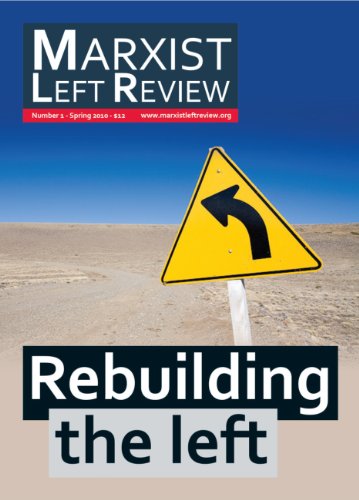 Marxist Left Review, a new journal published by Socialist Alternative, is launched as the most severe world economic crisis since the Great Depression of the 1930s has entered its second phase. This is after a temporary stabilisation made possible by trillions of dollars spent by the wealthy countries to prop up the financial institutions of capitalism. It is increasingly clear that the analysis put forward by Marxists – that this is a systemic crisis – is correct. As we go to press there is widespread fear of a double-dip recession in the US, and that European countries are still under threat of default on their debts. So Marxist politics have never been more relevant.

Socialist Alternative was established in 1995 as the result of expulsions of leading members from the International Socialist Organisation. We support and argue for the core politics of the international socialist tradition – that the Stalinist states were/are in no sense socialist, that capitalism is a system of crisis and that the working class is the only force capable of leading a struggle for socialism which will need a revolution in order to succeed. And our aim is to lay the basis for a mass revolutionary party based on the ideas of Marx and Lenin. We feel it is time for us to produce a more substantial publication than our website, www.sa.org.au, and our printed monthly magazine, Socialist Alternative.

The content of the journal will not be primarily analysis of current events and developments because the aim of this journal is not to duplicate material published by both Socialist Alternative members and others elsewhere. Our title is deliberately chosen. We aim to produce a clear argument for revolutionary Marxism, rather than an eclectic collection of left-wing ideas. The articles will be polemical and argumentative, critiquing arguments on the Australian and international left, revisiting theoretical and political questions in Marxism which we feel need some debate and clarification.

In this issue we are proud to include an extract from a speech given by Socialist Alternative member Rick Kuhn when he accepted the prestigious Isaac and Tamara Deutscher Memorial Prize for his book Henryk Grossman and the Recovery of Marxism. Rick draws on a rich tradition of debate to outline and defend Grossman’s commitment to building a socialist organisation. With the decline of popular enthusiasm for and involvement in the Labor Party, the role of the Greens has become important, posing serious questions for the far left. Ben Hillier outlines the nature of the Greens, drawing on the Marxist understanding of the middle class in capitalism to explain the Greens’ origins and trajectory. Diane Fieldes looks at the crucial role of the support small-l liberals gave to John Howard’s Northern Territory Intervention. She shows why their backing was more significant in enabling the Howard government to legitimise its racist attack on Indigenous rights than that of any conservatives could have been. And this, along with the indefensible contravention of the Racial Discrimination Act, continues under Labor. Sandra Bloodworth argues that Marx and Engels established a tradition which provides the basis for a fight for women’s and sexual liberation. She takes up arguments which serve to undermine the confidence of activists that Marxism is relevant to their struggles for women’s rights and in the LGBTI (lesbian, gay, bisexual, transgender and intersex) campaigns. And Mick Armstrong explains the origins of Socialist Alternative with a summary of the debates which led to the split in the International Socialist Organisation in Australia. We include this for two reasons: to explain the origins of Socialist Alternative, but also because we think there are important lessons to learn from the experience of the two subsequent groups which are worth recording.