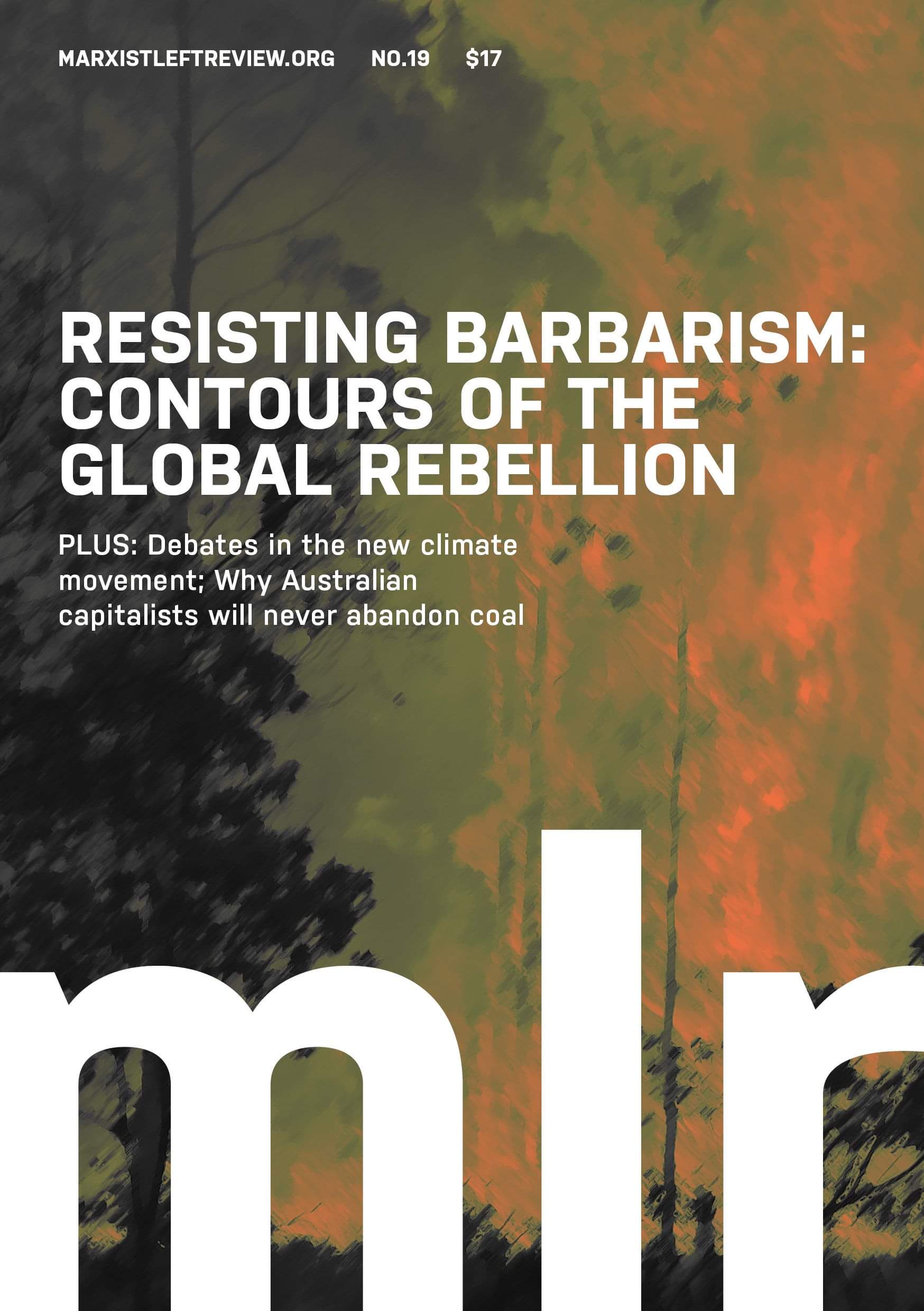 Review: The politics of the Indonesian union movement

Max Lane, An Introduction to the Politics of the Indonesian Union Movement. ISEAS, Singapore, 2019.

Between 2009 and 2015, sections of Indonesia’s nascent trade union movement attempted to enter the political fray. Many political and trade union activists hoped that an independent workers’ party could emerge. These hopes floundered, and key trade union leaders instead ran for political office with existing parties, even endorsing authoritarian and anti-human rights policies. Max Lane presents a sobering assessment of these trends, largely focusing on comparatively strong areas of trade union organisation among the industrial belt on the outskirts of Jakarta.

Trade union coverage in Indonesia is a mere 3 percent of the labour force, or 5 million members. This low union density is a product of both political and historical factors. The independence struggle against Dutch colonisers had resulted in a strong influence of radical nationalism and the left in Indonesia before 1965. Then President Sukarno’s attempts to allow the Indonesian Communist Party into government resulted in a pre-emptive wave of repression and mass killings by the army and Islamist organisations. These effectively destroyed the left and ended Sukarno’s rule. The subsequent “New Order” dictatorship of President Haji Mohamed Suharto and his GOLKAR party (Partai Golongan Karya [Party of Functional Groups]) lasted until 1998.

While Suharto presided over what appeared to be a steadily growing capitalist economy with substantial petroleum export revenue, only a small section of the population benefited. Industrialisation remained limited, poverty levels high, and the Suharto family and other members of his clique of supporters siphoned off much of the proceeds of economic growth.

However, at least three currents of trade unionism emerged. First and notionally largest was the regime-sponsored SPSI (Serikat Pekerja Seluruh Indonesia [All Indonesian Workers’ Union]). It largely functioned to dampen down any militancy amongst the country’s growing labour force.

Second, a dissident current emerged as the SBSI (Serikat Buruh Sejahtera Indonesia [Indonesian Workers’ Welfare Union]), in 1992. It brought together dissidents from the SPSI and non-government organisations.

Third, there were more radical and dissident currents. The most notable was probably the PPBI (Pusat Perjuangan Buruh Indonesia [Centre for Indonesian Working Class Struggle]). It was aligned with the radical PRD party (Partai Rakyat Demokratik [People’s Democratic Party]) that originated among student activists.

Amid growing political opposition and the impacts of the 1997-8 Asian economic crisis, Suharto was toppled in 1998, and a period of “reformasi” (reform) followed. Notionally free elections were held in 1999.

Trade unions adjusted slowly to the reformasi period, and remained quite weak after 1999. None had played a direct role in bringing down the regime. Repression and harassment against unionists continued. The pace of political struggle declined, while elite-based political parties consolidated, and the small radical left fragmented.

Nevertheless, some strong points of organisation emerged. Some of the old political demarcations in the unions broke down. A plethora of organisations emerged in the factory belt outside Jakarta. The most significant were the KSPI (Konfederasi Serikat Perkerja Indonesia ([Confederation of Indonesian Trade Unions]) and its main affiliate the FSPMI (Federasi Serikat Pekerja Metal Indonesia [Indonesian Metal Workers’ Union Federation]).

The FSPMI increasingly consolidated a base of members in the manufacturing sector after 2000, especially in motorcycle and car assembly plants. Officials from the SPSI tradition even allowed radical activists from the dissident trade union currents to play an organising and educational role. A well organised “Garda Metal brigade” was formed that was crucial to the success of demonstrations and pickets.

These newly consolidated unions took up political issues, mobilising a national campaign of mobilisations and demonstrations between 2008 and 2011, after Indonesia’s Congress failed to implement its 2004 Bill on Social Security Providers. In 2012 unions campaigned for wage rises, including an increase in the minimum wage. There was a considerable upswing in strikes and protests, culminating in a 2 million strong “national strike” in October. Workers successfully forced large wage increases.

After this, the momentum suddenly halted. Trade union, business and government figures signed a declaration of industrial harmony. The presence of leftists and other activists from the dissident trade union tradition in the FSPMI was quickly curtailed.

FSPMI leaders made a highly opportunist turn to electoral tactics. Rather than form an independent workers’ or labour-based party, its leaders ran as candidates for numerous elite-based parties. From 2013 the “Go Politik!” campaign substituted for workplace organising and participation in mobilisations and alliances. Disgracefully, Said Iqbal, a central leader of the FSPMI, became a supporter of Prabowo Subianto’s presidential campaign. A Suharto-era general, Prabowo was associated with many accusations of human rights abuses. He and his Gerindra party (Partai Gerakan Indonesia Raya [Great Indonesia Movement Party]) had only split from GOLKAR in 2008.

By late 2013, the rallies and demonstrations that were called were turned into pro-Prabowo gatherings. Other federations and groupings – confusingly – supported rival Joko Widodo’s candidacy.

Indonesian electoral politics was now a contest between two rival camps committed to a neoliberal model of economic development, and with only marginally different policies. Widodo tempered these policies with some moderate social reforms, such as expanding subsidised public health. Prabowo largely shared the same outlook but wanted a more disciplined approach to development and increasingly cultivated ties to conservative political Islamist currents.

[T]he “ideological” basis for organizing, mobilizing and agitating …[centres on] the phenomenon called “populism” – an agitational appeal to a broad coalition of the various segments of the poor and popular classes against the elite or against groups identified as the cause of popular poverty and economic backwardness… This has become an increasingly evident feature of contemporary Indonesian politics, and of political contestation within organised labour…reflected in the KSPI/FSPMI’s and other unions’ alliance with the Islamic populism initially targeted against…President Widodo. That populism alleges that Chinese, infidel communists and false Muslims are the cause of the suffering of the popular classes…

Lane presents this sobering analysis well. However, when absorbed in a case study it is important to remember that not all readers share the same level of interest or background knowledge. Some of the “blow by blow” narrative could have been jettisoned in favour of more explicit general reflection on the study’s broader implications. Are there more specific features of the Indonesian experience that have relevance in other situations?

More discussion and analysis of the historical features and the weaknesses of Indonesian capitalism and industrialisation could have enriched the analysis. Lane goes some of the way, noting that organised workers in large firms are only a small section of the working class. What emerges is a story of trade union leaders and political opportunism.

Some incorporation of Marxist insights on trade union bureaucracy and political opportunism would have been interesting. These are not and have never been the monopoly of the so-called “labour aristocracy” of the more developed capitalist countries.

Finally, how deep are the problems of Islamism and populism that Lane flags? Can they be redeemed in a more leftward direction, or is the ability of the dissident trade union activist layer to rekindle mass support for an independent socialist politics contingent on changes in mass struggle on a global scale?

Review: Resistance to the Accord

Indonesia: trade unions and the regeneration of radical politics

Max Lane provides an overview of the "rebirth" of a powerful working class movement and the challenges posed for emerging forces of the Indonesian Marxist left.
Read More →