Dark Mode
Issue
No.5 Summer 2013
What kind of organisation do socialists need? 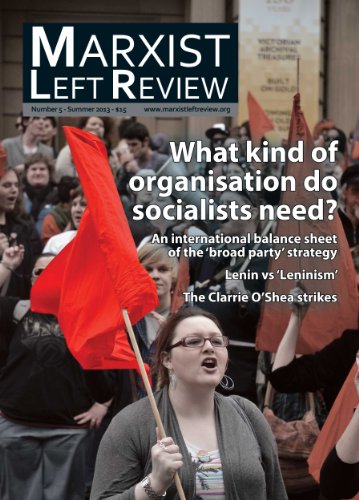 A note to our readers

When we launched Marxist Left Review in September 2010 we explained the purpose of the journal: “Our title is deliberately chosen. We aim to produce a clear argument for revolutionary Marxism, rather than an eclectic collection of left-wing ideas. The articles will be polemical and argumentative, critiquing arguments on the Australian and international left, revisiting theoretical and political questions in Marxism which we feel need some debate and clarification.”

At the time we saw the MLR as a means to explain Socialist Alternative’s particular interpretation of Marxism and what that meant when analysing current and historical questions. We were pleasantly surprised at the response. Sales have exceeded our expectations, so the first issue is presently being reprinted for the third time, others have sold out and been reprinted. Times and circumstances, however, change. As many of our readers will be aware, in the last six months Socialist Alternative has been engaged in discussing the prospect of unity with the Revolutionary Socialist Party. The RSP has a different history and traditions from SA, although we share our support for the stand Trotsky took from 1924 until his death in 1940 against Stalin and the bureaucracy he established on the ashes of the 1917 revolution.

The outcome is we expect to unite in time for the Marxism Conference SA organises each Easter. There has been overwhelming support in both organisations to take this important and exciting step. This in turn has created debate on the Australian left generally and discussions between SA and Socialist Alliance about the prospects of unity. Therefore the purposes of this journal are changing. The key issue for the left which arises is what kind of organisation should the left unite to build? That is reflected in three of the articles in this issue, one of which is by John Percy of the RSP. While the MLR will continue to be “polemical and argumentative, revisiting theoretical and political questions in Marxism”, it will include writers from different revolutionary Marxist traditions. We look forward to debates in our pages which we could not have foreseen in 2010 and a role for the MLR in clarifying the basis on which a new, larger, united revolutionary organisation could be built in Australia.